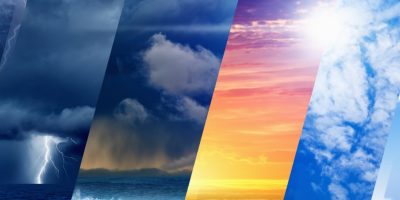 95% of working adults who took part in their survey revealed their jobs offer “Summer Fridays” which allowed a short day or day off on occasional Fridays during the season!

Over eight in 10 employees say they benefit from this perk because it makes them feel much happier at work.

This new survey wanted to know the impact weather has on productivity with almost 75% believing it directly impacts how they work.

Respondents claimed that cool temperatures and clear blue skies are associated with being the most productive at work, coinciding with 43% who believe they do their best work in the spring.

It’s no surprise, then, that 65% prefer working outside when the weather is nice — from getting work done in local cafés to rooftops and patios.

Weather Factors That Can Make People Have A Bad Day

Employees shared what weather factors can make them have a bad day at their jobs — with conditions like heavy rain and freezing temperatures being the root cause of unproductive workdays. Meanwhile, 22% associate snow with having a bad day at work.

Overall, 68% said the motivation to learn or absorb information at work drops when the weather is poor.

Time is also a factor in people’s productivity. To have the “best day” at work, the average person needs to wake up at 7:30 a.m., while rising an hour later at 8:30 a.m. would be considered the “worst” way to start off the day.

Sixty-four percent noted that daylight saving has affected their productivity in the past, with a majority (85%) saying they feel unproductive when the clock changes.