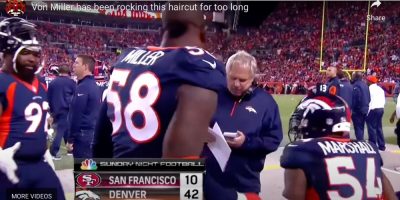 Doritos is giving a fan a chance to go to the Super Bowl and all you have to do is shave a triangle onto your head!

Inspired by Buffalo Bills linebacker, 2x Super Bowl Champion and Super Bowl 50 Most Valuable Player Von Miller and his triangular haircut, which caught viewers’ attention earlier this football season, #NameThatTriangle is a national social contest that champions the power of triangles and rewards fans who adopt the style and come up with a clever label for their new ‘do.

Plus, Miller is someone who understands that the triangle is a shape that goes beyond the connection of three lines and becomes a symbol of strength, change and uninhibited expression.

The Instagram post reads; Your chance to attend Super Bowl LVII is here. Post your 🔺 triangle hairstyle and give it a name using #NameThatTriangle and #Entry beginning December 11. Winners will be announced weekly for a signed Von Miller replica helmet and a Triangle Hair Kit. One grand prize winner will get two tickets to Super Bowl LVII!