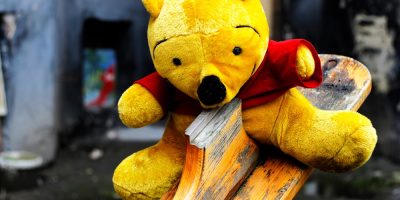 That silly old bear has traded his honey pot for a machete.

In the film, Christopher Robin has gone to college and returns with his girlfriend only to discover his old pals Pooh and Piglet from the 100 Acre Wood have turned feral and murderous.

We witness the sweet animals kill for fun.

This movie wasn’t made without a lot of controversies…Author A.A. Milne’s characters and stories entered the public domain five months ago, and many aspects of the Disney version, which “Blood and Honey” have nothing to do with, are still under copyright.

The director says the movie is based mainly on the original story from 1926 and that they were very careful not to infringe on Disney’s copyrights.

As for a release date, the trailer only says, “coming soon.”