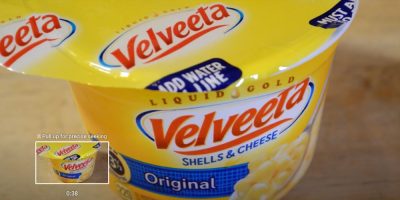 People will find a way to sue over anything!

A woman in Florida named Amanda Ramirez is suing Kraft, the makers of Velveeta’s microwavable Shells & Cheese cups because she says they LIE about how long the mac-and-cheese takes to prepare.

Amanda claims she bought the product several times over the past couple of months and paid a premium price of $10.99 for packs of eight because the box says that the cups are “ready in three-and-a-half minutes.”

But she says that’s NOT true, and they know it.  There’s a four-step set of instructions printed on the box, and the microwaving alone takes three-and-a-half minutes.

That’s apparently what Kraft was referring to, but Amanda argues the box implies that the whole process takes that long.  The rest of the steps are:  Remove the lid of the cup, add water, and, after microwaving for three-and-a-half minutes, stir in the cheese sauce.

The lawsuit doesn’t say how long it took Amanda to fully complete all the steps.  But let’s say at best it takes another minute!

Amanda’s lawyers have filed a class action lawsuit asking for more than $5 MILLION in damages.  The idea is that people are paying more for this product than other similar ones that aren’t making deceptive statements.