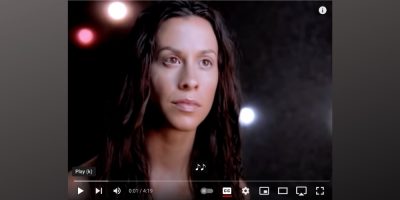 Alanis Morissette was supposed to appear at this year’s Rock & Roll Hall of Fame induction ceremony on November 5th but pulled out at the last minute.

Alanis was going to pay tribute to Carly Simon, one of the evenings honourees.  She was to perform with Olivia Rodrigo Simon’s 1972 hit, “You’re So Vain,” but Morissette wasn’t there when videos started to pop up from the night’s event!

Now we know why!  Alanis took to Instagram, to explain why she wasn’t on stage. The video acknowledges Morissette’s incredible experiences over the years and also the ones where she experienced sexism.

Alanis was at rehearsal for the event on Friday and according to sources, there were different accounts as to what happened that caused Alanis to walk off stage.

So Olivia Rodrigo performed Solo at the ceremony on Saturday night!