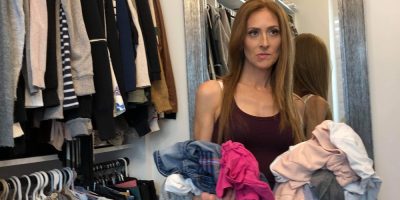 The average person (most likely female, LOL) has almost $1300 worth of unworn clothes in their wardrobes with 30 percent intending to buy even more items before having a clear out.

A poll of 2,000 adults found that 32 percent admit they have too many clothes – however they can’t resist the lure of a new outfit. (guilty)

More than four in 10 (43 percent) have bought an item online, not liked it but kept it anyway. (same)

Almost 60% of those who’ve done this admitted they ‘couldn’t be bothered to return it. (exactly)

Just over two-thirds (67 percent) have so far decided against both clearing space in their wardrobes and making money in the process by selling old items online. (I don’t know how to sell things online)

Although those who have sold clothing online have admitted to making some pretty good cash doing so, on average about $500. (Maybe I’ll learn, LOL!)