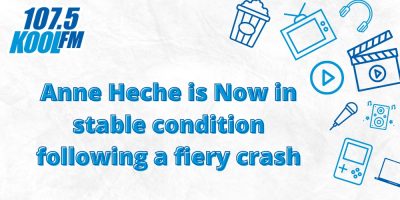 Anne Heche is in stable condition now after the car she was driving crashed into a home and became engulfed in flames on Friday, a representative for the actress said.

“Her family and friends ask for your thoughts and prayers and to respect her privacy during this difficult time,” the representative said.

Heche was previously in an intensive care unit with “severe burns” following the Friday crash.

According to a source “She has severe burns and has a long recovery ahead. Her team and her family are still trying to process what led up to the crash.”

According to the Los Angeles Police Department, the vehicle was travelling at high speed when it ran off the road and collided with a residence.

Heche was taken to a local hospital by Los Angeles Fire Department paramedics in critical condition. It took firefighters more than an hour to “access, confine and fully extinguish the stubborn flames within the heavily damaged structure,” the LAFD said.