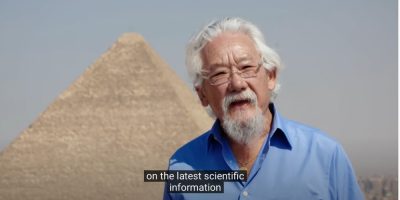 He’s been the man who cares more about the environment than anyone else, so much in fact; that he has had his show forever.  The Nature of Things was a truly Canadian show that we all proudly watched in classrooms since the late 1970s…

He had the longest-running nature show, for over 4 decades and announced that he is stepping away from it all.

“I have been fortunate to have been endowed with good health which has enabled me to remain the host of the series long after my ‘best before date,’” Suzuki said in a statement. “Aging is a natural biological process that creates an opportunity for fresher, more imaginative input from younger people and years, I have warned that to ensure the continuation of The Nature of Things, we must prepare for the transition when I leave. That moment is now.”

On social media, Suzuki’s retirement news was met with a mixture of sadness and derision.

Perhaps there are critics out there, but for the time being, let’s focus on what he did for us and the science community.  Barbara Williams, Executive Vice President of CBC said, “David has made science more accessible to countless viewers in Canada and around the world, finding new ways to demystify our complex world and illustrate how the future of humanity and the natural world cannot be separated — long before climate change became a hot topic.“