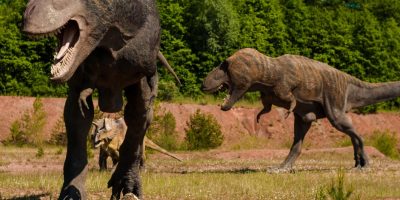 In a new survey, 74% of Americans agree with that.  But what if they could REVIVE an extinct species, using genetic science?  Only 32% of people want scientists to attempt to bring back extinct animals.

If they could, the most popular option would be the giant tortoise.  The passenger pigeon and the northern white rhinoceros are next.  The dodo bird is fourth, followed by the Caribbean monk seal, the Tasmanian tiger, giant sloths, the woolly mammoth, and the sabre-tooth tiger.

Related: Nearly Half of the People Are Convinced Dinosaurs Still Exist!..

But you’d have to draw a line at bringing back DINOSAURS right?  Well, not necessarily.  Of the people who want to bring back extinct species, about 1-in-10 people want scientists to bring back dinosaurs too.  (???)

Specifically, 12% want the Triceratops 11% want Pterodactyls, and 10% are crazy enough to want a return of the Tyrannosaurus rex.

(To be clear, the survey only included ADULTS, so no, the results weren’t skewed by Eight-Year-Olds.)