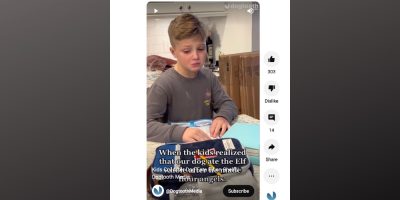 Posey, the dog has certainly found herself on the naughty list after scoffing down an entire Elf on the Shelf toy and leaving the two kids in her household distraught.

Rudy, the Elf on the Shelf was laying on a kitchen countertop full of flour to make look like the little elf was making snow angels!

Well not for long, because when Jessika got home from the school run, the 32-year-old found that Rudy was gone, and all that was left in his wake was a light dusting of flour.

Mom and two kids aged nine and six, searched the house from top to bottom for Rudy, but the doll was nowhere to be found.

So mom looked at the dog Posey, who had flour on his nose and a guilty-looking face.

A TikTok video shows the kids figuring out what happened to leave them both in tears.