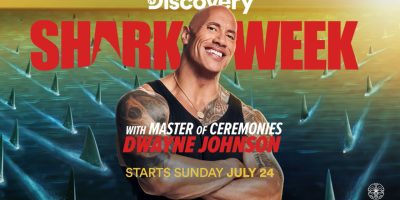 This year, Dwayne “The Rock” Johnson will be Shark Week’s first-ever “Master of Ceremonies”.

This is the 34th annual Shark Week on Discovery. It kicks off Sunday, July 24th. You can keep up with the chaos at SharkWeel.com, where some of this year’s crazier-sounding Shark Week specials include “Jaws vs. Kraken”,“Pigs vs. Shark”, and “Mechashark Love Down Under”.

Tracy Morgan will also make an appearance, along with the cast of “Jackass.”

HERE IS SOME OF THE SCHEDULE

A 14-foot giant mako shark is spotted in the waters off the Azores. Underwater cinematographer Joe Romeiro tries to capture it on film.

Follow the resurgence of great white sharks off the beaches of Cape Cod.

Johnny Knoxville, Chris Pontius, Wee Man, Jasper, Dark Shark and Zach Holmes return for a second year to help a friend over his fear of sharks.

Mark Rober and Noah Schnapp from “Stranger Things” search for the strangest sharks in the ocean.

High-tech cameras are used in hopes of capturing the largest breaching great white ever seen.

In South Australia, a fisherman will help prove that the great white is the ultimate mega predator.

The guys try to dispel the myth that sharks are man-eating beasts through extreme challenges.

The swimming pigs of the Bahamas are becoming the favourite food of the local tiger shark.

Wildlife conservationist and biologist Forrest Galante travel to Papua New Guinea to prove that sharks are evolving to walk on land.

An investigation into why an entire great white shark population disappeared overnight in South Africa in 2017.

Tracy Morgan and shark experts talk about the craziest and most ferocious sharks in the ocean. F

July 28, “Monster Mako Under the Rig”

A mysterious group of mako sharks of the Gulf of Mexico are different from other makos.

Great whites and makos — are tracked during their yearly migration off the coast of New Zealand.

An all-female crew will cage dive, free dive, and use drones and decoys to track missing white sharks.