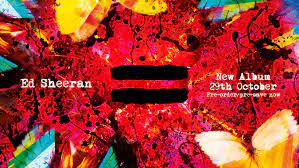 The 4th studio album ‘=‘ comes out October 29th, and is available to preorder today on all platforms, cd, vinyl, and cassette.

Ed revealed the news on Instagram last week by posting both the album artwork and the tracklist, which features 14 new tracks and his previously released single, ‘Bad Habits.’