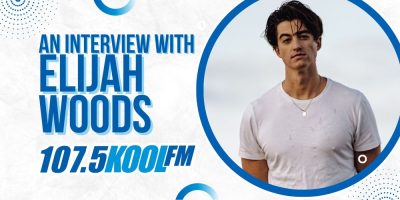 With Elijah Woods’ recent release of “ilu”, we were excited to sit down and catch up at our studio this month during an interview with Amy Aust.

“I’m very, very happy to finally have [‘ilu’] out in the world … It’s interesting to see something on social media take shape in such a way and have it connect with so many people,” Elijah shares.

With the success of his last single “Lights”, there’s some pressure for “ilu” to perform well. But Elijah tries to keep his focus on his music.

“I really try to focus on the things that are within my control, which is making the best possible version of the song for myself. And I hope that people can, I don’t know, get in on that version, and really accept the viewpoint that I tried to get across.”

Elijah goes on, “The reception for ‘ilu’ has been incredible. And reception for lights was unbelievable … the public perception of it is something that is very much out of my control, but it’s always rewarding when it really does well. So I hope that it does well.”

After a long two and a half years, Elijah is happy to get back into the flow of things.

“It’s been pretty recluse. I mean, we’ve all kind of been pretty introspective for the last little while and it’s been nice for me, in terms of a writing perspective, but I feel like I’m kind of written out for a little while. I need to get on the road, play these songs, meet some people and just see people again.

“I just miss the actual human interaction piece of music. And it’s so strange when you have the opportunity to do that after so many years. It’s like, ‘Oh, yeah, I forgot I did this.’ I forgot that we actually get to see people and get to sing the songs and get to actually connect with people in the music … I’m so thankful for being back to that.”

And fans are just as excited to return to live performances. On Canada Day, Elijah played for a crowd of nearly 20,000 in Mississauga. It was the city’s first in-person Canada Day celebration in three years.

Elijah played the venue during a New Year’s Festival a few years prior but shares that this experience was even more unbelievable.

“I kind of expected the same thing [as the last show]. I thought it was gonna be like 10,000 people and we showed up and it was bananas. They knew all the lyrics to pretty much all my songs … It was so much fun … I didn’t know how much I missed it until I actually got back on stage.”

Part way through his Canada Day show, Elijah’s mic died during a performance of “Lights”. But fans quickly picked up where he left off, singing along with him.

Elijah explains “Lights” is a personal song for him and that having 20,000 people sing it was wild.

“It’s ultimately why I do this, outside of feeding my own ego.” He laughs before continuing, “But I really really love the human aspect of that. I love the connection; the people being able to put themselves into the song and relate enough to it to actually know the lyrics … it just means the world to me.”

Elijah is quickly making his mark on the music industry but it doesn’t come without its stresses. He explains that when working on his own projects, he knows exactly where he’s going with it and feels in control. “I like to keep it as relaxed as possible because I ultimately think I get the best, most real stuff, most authentic stuff for me when it’s just easy.”

Other people’s work is a different story …

“When you’re working with other people, it’s very much like ‘Okay, I gotta pick that out of your brain and turn it into something that we both like and that everyone else is also going to enjoy … I think that’s a bit more high stress for me.”

As a singer, songwriter and producer, it comes as no surprise that it can get exhausting sometimes. But Elijah explains that he couldn’t see himself doing anything else. “It’s either this or I’m serving at Starbucks.” He continues jokingly, “I’m pretty good at making coffee, but I’m not that great. I’m better at making music.”

That’s because, like many artists, Elijah is wired differently. He thrives in a space where he can express himself and stay busy.

“It’s what I need to do. It’s how I need to express myself and for me, it’s just a necessity.” He continues, “Whether people were listening or not, I would still be doing it. It’s what I want to be doing. And it’s really what feeds me on so many levels. I love filling my time. I love learning new skills. That was largely why I started singing – I wanted to do something new and something different.”

Here at the studio, we’re everything that Elijah is putting out into the world and can’t wait to see what he’ll get up to next. If you want to see the whole interview, check it out here. Elijah talks more about his plans for the rest of the year, how he feels about content creation, his rapid growth on TikTok and the awful candy we shared with him. All of it wraps up with a game of Lyric or Lie with Amy Aust.

RELATED: Elijah Woods talks about keeping songs for himself …