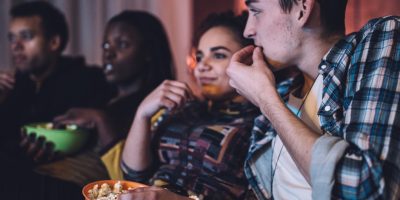 This generation was asked about the musts for a perfect movie night! Factors include closing the curtains, turning off the lights and comfy chairs.

A third like to watch their favourite shows accompanied by their partner but about a quarter would rather not risk being disturbed at a crucial point in the episode – preferring to watch TV on their own.

The research found the average 18 to 25-year-old will spend seven hours a week in front of the TV and will watch up to four box sets at any one time.

A Way To Relax And Unwind!

The study also found it takes 38 percent only a couple of days to finish off a series, while one in 10 say it takes them less than a day, with nearly three in 10 feeling a sense of accomplishment when they do.

Almost half turn to TV to help them relax whilst more than four in 10 watch to avoid boredom and over a third use their favourite shows as a distraction from their daily lives.

A third of young adults tune in to learn something new while 31 percent press play because it inspires them to try new things or travel to new places.