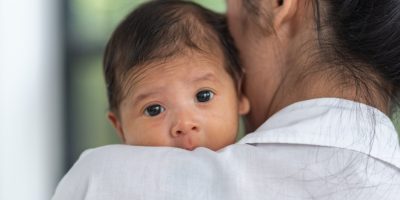 A poll of 2,000 parents aged 26-41 revealed just 53 percent can recite all the lyrics to Baa Baa Black Sheep, while only 51 percent can confidently sing all of Row, Row, Row Your Boat.

Humpty Dumpty baffled half of those polled, while Jack and Jill were better known compared to some of the other kid’s classics.

The survey found that three in five parents can’t soothe their babies to sleep with a complete rendition of Rock a Bye Baby. (That’s a hard one). Just bust out the ‘Friends’ theme!

In fact, a tenth of millennial moms and dads do not sing lullabies at all to their little ones – because they have a ‘terrible’ singing voice or feel awkward.

Instead, one respondent admitted they have rapped Kanye West songs to their baby, while another has channelled their inner Mick Jagger to perform The Rolling Stones classics at bedtime.

I used to sing the theme to Punky Brewster to my kids!

The study also found nine in 10 parents will read bedtime stories to their children – and 43 percent think these have a better impact on soothing their little one before bed.

The Very Hungry Caterpillar, The Gruffalo and We’re Going on a Bear Hunt were the three most popular bedtime books for millennial parents to read.

Lullabies That Young Parents Can Recite The Words To…Mostly!