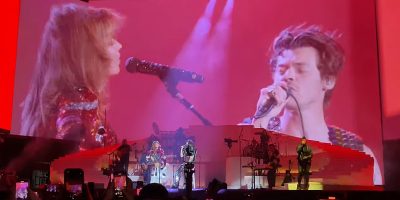 It was opening night at the annual festival and Harry Stylers headlined at the Empire Polo Club in Indio, California Friday.

Halfway through his 80-minute set, he wowed the crowd when he brought Shania Twain on stage to perform, two songs, Man! I Feel Like A Woman! And You’re Still The One.

Harry said: “This lady taught me to sing. She also told me that men are trash.”

Shania said: “I’m a bit starstruck, what can I say? No, I’m a fan of you, of course. I know that when I was writing this song, you were just a little kid. It’s kind of a dream and very surreal to be sitting here right now to sing this song with you. I think I’m just in love and this song is all about love. So let’s just sing about love.”