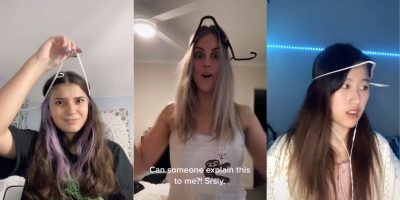 This is so dumb it can’t possibly be true, right?  Have you tried the “Hanger Challenge” yet?  Because it’s all over TikTok.  All you do is take a coat hanger, wedge your head in it, so the hook points to one side, then close your eyes, and your head will involuntarily start turning.

Most people who’ve tried it are shocked when it WORKS.  And there’s some science to back it up.   It’s a real thing called the “hanger reflex” that was first documented in 1991.

@hullsome Have YOU heard of the HAGNER REFLEX? Try it for yourself, this makes NO SENSE! Who can explain this to me? #Geocaching #HangerReflex #Hanger #CacheMeIfYouCan ♬ Jiggle Jiggle – Duke & Jones & Louis Theroux

Scientists still don’t know why it happens, but it’s not just about seeing the hook in your peripheral vision.  In one study, researchers built a ridiculous-looking hat to test different pressure points on people’s heads.

They were able to recreate the coat hanger reflex with it.  So that has something to do with it.