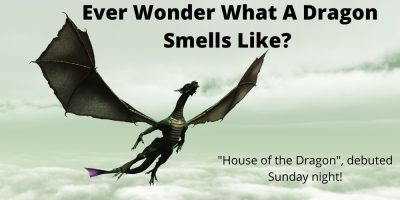 And Nerdist.com came up with some theories of what a dragon would smell like in real life. They included rotting flesh, barbecue, outer space, urine, and corn tortillas.

Perhaps we should compare a dragon to a dinosaur?

An exhibit at the Field Museum in Chicago lets visitors smell Sue the T. rex’s breath. Scientists determined rotting flesh as the likely smell. They diluted it down enough so that paying customers wouldn’t gag. Apparently, the team also considered hyena poop as the closest smell to T. rex fecal matter because both species eat animal bones as well as flesh.