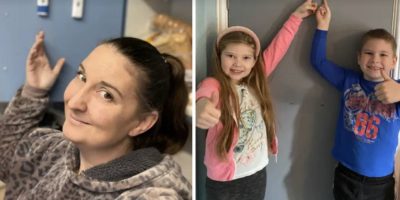 Have you ever struggled to get your kids to come for dinner and thought, “Maybe I should ring the doorbell?”

A woman found a way to make it work. A mom with four kids says she does NOT like screaming at the kids to come out of their rooms, so she bought four doorbells, and installed them inside her house with four buttons in the kitchen, and a “bell” in each child’s room.

This sounds way better than what I do, which is call them on their cell phones.

Related: Mom Shows Her Hack To Get Kids To Do Chores…

You might have seen these, they aren’t the classic, obnoxious doorbells, they’re wireless, with a modern look.  There’s a battery-operated transmitter, which you can stick to the inside of a cupboard, and a receiver that you plug into an outlet. She did a TikTok video where she demonstrated how it works, the kids to come down whenever they hear their chime, whether it be for dinner or school in the morning.

She said she bought them for $15 each on Amazon, but there are a lot of options, ranging from $10 apiece up to more than $50.