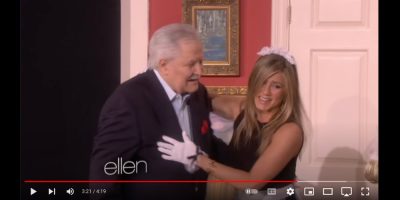 Jennifer Aniston took to social media to confirm that her father has died at the age of 89.

“You were one of the most beautiful humans I ever knew. I am so grateful that you went soaring into the heavens in peace – and without pain. And on 11/11 no less! You always had perfect timing,” Jennifer Aniston wrote in a statement shared on Instagram. “That number will forever hold an even greater meaning for me now.”

The actor appeared in numerous TV series and nearly three thousand episodes of “Days of Our Lives” over the course of his long career.

According to CNN, Aniston was born John Anastassakis on the Greek island of Crete in 1933. He emigrated to the US when he was 10, and his family shortened their surname to Aniston.

Before he became a soap star, Aniston served in the US Navy and appeared in an off-Broadway musical.

He got his big break when he was cast in the long-running soap “Love of Life” and later “Search for Tomorrow.” But he didn’t become a household name until he joined “Days of our Lives” in 1985 as “romantic villain” Victor Kiriakis, a criminal with a penchant for charming the women of Salem, Illinois.