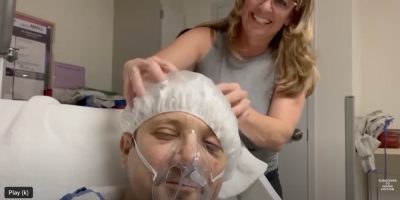 Renner suffered blunt chest trauma and orthopedic injuries while clearing snow outside his home in Nevada on New Year’s Day.

He was in critical condition for four days and spent over two weeks in the hospital.

Jeremy took to social media to update us on his condition.

On Twitter, he said the incident had been a “tragedy for my entire family” but had transformed into “uniting actionable love”.

“These 30-plus broken bones will mend, grow stronger, just like the love and bond with family and friends deepens,” he wrote, thanking everyone for their “messages and thoughtfulness”.

The accident happened after a New Year storm hit the US, killing dozens of people and dumping heavy snowfall across several states.

Renner used his snow plow to rescue a family member driving his car, but got stuck in the snow near his house.

Renner successfully towed the car-free, but when he got out, the plough began to move while empty, Washoe County Sheriff Darin Balaam said at the time.

Renner was trying to get back into the driver’s seat to stop it moving when the huge piece of equipment ran him over, Mr. Balaam said.