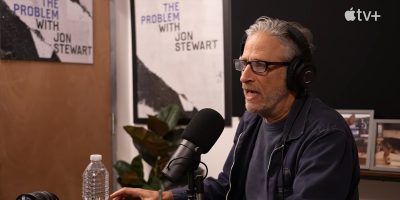 Jon Stewart has had it with Newsweek.

Newsweek recently published a story  saying that Jon Stewart called author J.K. Rowling anti-Semitic. Stewart has responded saying “No I didn’t” and has since posted a video clarifying his comment.

The claim by Newsweek comes from part of a conversation Stewart published in December (2021) for his Apple TV+ show, The Problem with Jon Stewart.  In the conversation (see below) Stewart was chatting with Henrix Blix and Jay Jurden, both wirters. This part of their conversation started with Jurden talking about attending bar mitzvahs in Mississippi. “It was fun! A lot of fried food!” Jurgen says when asked what the celebrations were like. Jon jokes that bar mitzvahs now are much different from when he was a child. Now, they are big events that announce “The Jews are here and we will DAZZLE you!”

Jurgen jokes “What chapter of Harry Potter is that in?”  Stewart responds saying “Here’s how you know that Jews are still where they are” and goes on to explain watching the movies for the first time and being surprised to see the bankers looking like stereotypes of Jews from anti-Semitic literature.

In the video posted today, Stewart explains that this was a light-hearted conversation with friends. He says he was pointing out how anti- Jewish tropes are so “embedded” in our society that “they’re basically invisible even in a considered process like movie making”. He clearly states in the most recent video “I do not think J.K. Rowling is anti-Semitic”.

Here’s the clip that sparked the Newsweek story.