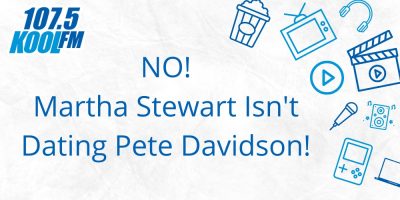 Martha Stewart denied she’s dating Pete Davidson, but to be honest, we kind of wish she was.

Martha Stewart has responded to viral memes suggesting a budding relationship between her and Kim Kardashian’s ex, Pete Davidson.

Despite being snapped holding hands with the former “Saturday Night Live” star at the White House Correspondents’ Association Dinner in April, the 81-year-old said she’s not about to become Davidson’s next love interest.

“Pete Davidson is like the son I never had!” the famous domestic diva told the Daily Mail with a laugh at the opening of her first-ever restaurant at the Paris in Las Vegas on Friday.

“He is a charming boy who is finding his way,” she said.

Davidson split from Kardashian, his girlfriend of nine months, in early August, citing reasons including his filming schedule and Kardashian is busy raising her children and running her business.