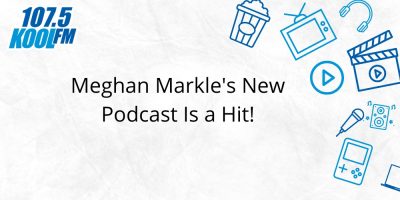 The Duchess of Sussex has claimed the No. 1 podcast position on Spotify’s charts in six markets worldwide, including the U.S. and U.K since the debut of her podcast on Tuesday.

Meghan’s first guest was longtime friend Serena Williams.  The conversation was taped prior to Williams announcing that she was retiring from Tennis.

The first episode also features Dr. Laura Kray, a leading expert on gender in the workplace, and the way in which these archetypes affect all of us.

The new podcast is currently more popular than “The Joe Rogan Experience,” which in the U.S. is consistently the most listened to podcast on Spotify.

“Archetypes,” released Tuesday exclusively on Spotify, is No. 1 on the streamer’s podcast charts for the U.S., Canada, the U.K., Ireland, Australia and New Zealand. Next week’s episode will feature a conversation between Markle and Mariah Carey.