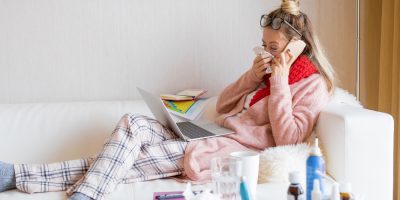 A new survey finds that nearly half of people feel guilty calling in sick to work.

The poll of 2000 adults revealed that 41% are likely to call in sick the moment they feel themselves getting sick! About 30% say they don’t feel guilty about it at all!

The study found 40% of people were reactive about their health pre-pandemic, only taking action for their health when they were not feeling well, while 32% were proactive — treating symptoms as they pop up, rather than waiting to get sick.

Two years later, the tables have turned: 43% now claim to be more proactive about their health and 34% are reactive.

More than three in five (64%) are more likely to cancel plans now than before the pandemic if they feel themselves getting sick. Nearly as many (60%) still feel bad about cancelling their plans.

From the moment they show a single symptom, 74% claim they’ll do everything in their power to prevent themselves from getting sick.

Since the beginning of the pandemic, 71% have found themselves self-conscious when they cough or sneeze in public — 61% will do almost anything to avoid coughing or sneezing in public.

Over half (52%) said they turn to products that contain Zinc to help them shorten their cold.