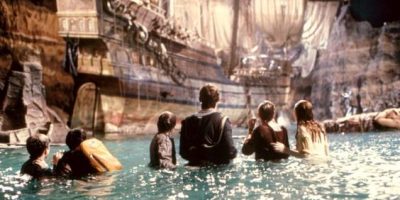 The world is one step closer to finally finding One-Eyed Willy’s treasure.

Explorers in Oregon have discovered part of the real “pirate” ship that inspired the movie “Goonies.”

According to National Geographic, state officials confirmed that timbers from the shipwreck of the 17th-century Spanish galleon were found in sea caves earlier this week.

The legend of the Santo Cristo de Burgos reportedly inspired filmmaker Steve Spielberg to dream up the idea for the 1985 movie — about a group of kids out to seek a sunken ship’s pirate booty and save their family homes from foreclosure.

For 300 years, tales of the shipwreck spread, with the area’s indigenous tribes passing down the legend of a ship that had vanished off the Oregon coast around 1693, carrying porcelain, beeswax and pricey Chinese silk.

Steven Spielberg had reportedly seen a newspaper story about the legendary ships and their precious booty, which inspired him to co-write and executive produce the cult-favourite film, starring Sean Astin, Corey Feldman and Josh Brolin.

The “Goonies” ship will never be found, though: The 105-foot-long Inferno, built for the movie, was destroyed after production.