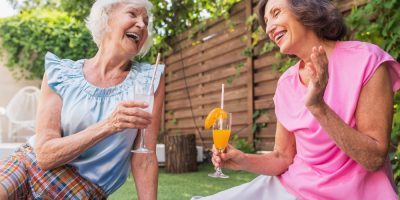 A random sample of 2,000 Americans aged 55 and over were surveyed in a report conducted OnePoll for LifeTime, finding a fifth feel lonely for more than half the week.

Three-quarters admitted their social circle has shrunk as they’ve gotten older and nearly half of respondents shared that they’ve stopped being friends with at least three people in the last two years.

However, 83% are optimistic about new friends, saying feeling it’s never too late in life to create fulfilling relationships.

As people get older, 52% say they want to focus on spending their time with friends, 40% want to travel and 39% want to improve their overall health.

People are more likely to try — and remain — active if they have a friend to motivate them, with 64% claiming they would be more physically active if they had someone to do it with and 46% saying they’ve made a new friend while being active.

Of those surveyed, 60% said they’d try out a new activity if they had someone to do it with, hoping to make a friend through walking or hiking, swimming or strength and conditioning classes with 37% admitting it can get lonely to stay active solo.

Whether you’re nine years old or 90, people tend to be happier and healthier when they regularly participate in activities with friends