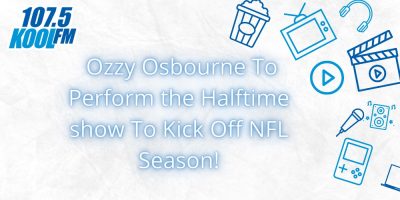 He’s 73 and recently underwent life-altering surgery in June, but this Crazy Train isn’t ready to get off the tracks just yet!

Held at California’s SoFi Stadium, Ozzy is set to perform a multi-song medley during the appearance.

The Los Angeles Rams announced the half-time performance on Twitter, by writing: “Ready to rock for Thursday night football.”

Ozzy’s performance also leads up to the release of his new album, ‘Patient Number 9′, due out later this year, and featuring appearances from Red Hot Chilli Peppers’ Chad Smith, Metallica’s Robert Trujillo, and the Foo Fighters’ late Taylor Hawkins.

And if all this isn’t enough, He and his wife Sharon have a new reality show coming out. A new 10-part series, ‘Home to Roost’, focuses on their journey back home to the U.K. from America.