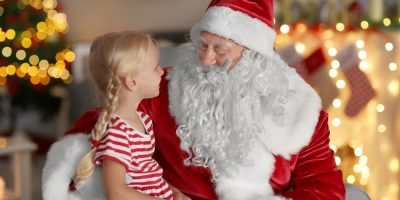 Santa booker HireSanta.com has logged a 30% increase in demand this Christmas season over last year, after losing about 15% of its performers to retirement or death during the pandemic, said founder and head elf, Mitch Allen.

While many Santas are back and ready to spread holiday cheer, many have retired leaving agencies scrambling to fill Santa voids!

Inflation has also taken a bite out of Santa. Many are older, on fixed incomes and travel long distances to don the red suit. They spend hundreds on their costumes and other accoutrements.

Due to inflations, some Santas have gotten a raise! Bookings for many Santas were made months in advance, and some work year-round. Allen’s Santas will earn from $5,000 to $12,000 for the season.

A few Santas told The Associated Press they’re unbothered by the cost, however. They’re not in the Santa profession to make a buck but do it out of sheer joy.

Agencies are juggling more requests for inclusive Santas, such as Black, deaf and Spanish-speaking performers. Allen also has a female Santa on speed dial.

Santas take their job very seriously, with many spending weeks in formal Claus training. If you want to see how seriously people take their role as Santa, there’s a new HBO Max documentary titled ‘Santa Camp.’