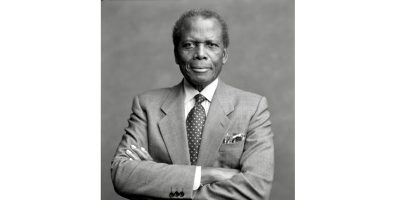 Film icon and the first Black man win an Academy Award, Sidney Poitier, has died at the age of 94 in his home in the Bahamas.

Born February 20th, 1927  in Miami, Florida, Poitier was the youngest of 7 children.  His family was from the Bahamas. His arrival during their trip to the US was unexpected as he was two months early. Poitier was not expected to survive being born so premature.

Poitier moved back to the US as a teenager and enlisted in the army in November of 1943. He was assigned to a veterans hospital in the US. Unhappy with how the patients were treated, Poitier faked a mental illness in order to be discharged.

After the army, Poitier became successful on the Broadway Stage and then on film. His first movie was No Way Out where he played a doctor treating a bigoted White man.

Poitier won the British Academy of Film and Television Arts Award for Best Foreign Actor and the Berlin Film Festival’s Silver Bear Award for his role in the 1958 film The Defiant Ones. In 1964, he won the Academy Award and the Golden Globe Award for Best Actor for Lilies of the Field (1963) playing a handyman helping a group of German-speaking nuns build a chapel.

I grew hearing my mother talk about Sidney Poitier and, upon learning about his death, gave her a call. She told me that Poitier was a hero in Jamaica. “It was so great to see a Black man in a role where he wasn’t [subservient]  to a white person,” she explained. The 1967 film To Sir With Love was a particular favourite for my mother and her friends. “It was our experience. We had Black and White teachers. To see that portrayed in that man was so heartwarming.” And of course, “He was so handsome, to boot!”

Poitier’s film roles were an important part of the Civil Rights movement in the US.

Powerful beyond the stage and screen. pic.twitter.com/hEKRxGvoM2

Poitier was knighted by Queen Elizabeth II in 1974.  In 2009, he was given the highest civilian honour in the USA, the Presidential Medal of Freedom. Poitier also served as the Bahamian ambassador to Japan from 1997 to 2007. He was also a board member at Disney.

In 1976, Sydney Poitier married Canadian actor Joanna Shimkus, his second wife. In 2017, he was photographed with his wife, his ex-wife, 27 of his children, grandchildren, great-grandchildren and godchildren for his 90th birthday. See that photo HERE.