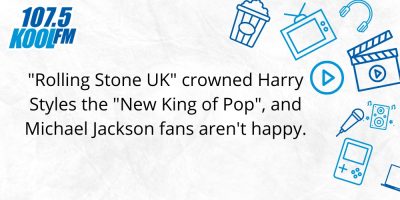 Today (August 22), Rolling Stone UK kicked off the week by sharing their latest cover feature with Harry Styles. The superstar has built quite the brand for himself following his One Direction exit, making him one of the biggest artists in the world.

Even so, things took a turn after social media got ahold of Rolling Stone‘s cover where they dubbed Styles the “new King of Pop”—a phrase that has long been tied to Michael Jackson. Music fans took issue with Styles’ latest title, especially within Hip Hop and R&B circles.

“There is no new King of Pop. You don’t own the title @RollingStone, and you didn’t earn it, my uncle did. Decades of dedication and sacrifice. The title has been retired. No disrespect to @Harry_Styles, he’s mega talented. Give him his own unique title.”