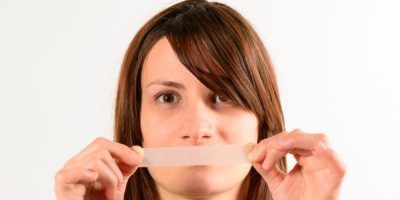 People are taping their mouths shut overnight in the latest dump TikTok trend.

The internet appears to be discovering the benefits of breathing through your nose, which are supported by health experts, but the method being used has been called into question.

The idea is simple—take a small amount of tape and apply it to the middle of your lips to try to stop your mouth from opening at night. As the videos show, it’s a very different look from the heavy movie mouth-taping that’s done to keep people quiet.

The tag “#mouthtaping” has 23 million views across the platform and some videos on the technique have reached into the millions.

Mouth taping might not be completely approved, but the benefits of nose breathing are universally agreed upon.

James Wilson, AKA The Sleep Geek, who works with organizations, sports teams and individuals and explained: “There are benefits to breathing through your nose, which mouth taping is trying to encourage. Nose breathing is healthier than mouth breathing as it filters foreign particles out, humidifies the air you breathe in and breathing through your nose helps dilate your blood vessels, which can help the body circulate blood more efficiently.

But Should You Do It?

To put it simply: no, says Wilson. “Unfortunately mouth taping is an extreme way of encouraging nose breathing that has some serious health risks,” he explained.

A large cause of concern is the risk of sleep apnea, narrow nostrils or something blocking your nasal airways.

“If this is the case then taping your mouth will make your health worse and could contribute to more serious issues like heart disease, COPD and stroke, particularly if applied and you are a sleep apnea sufferer,” said Wilson.