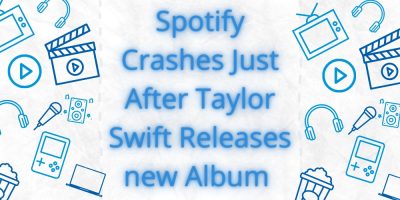 Millions of “Swifties” stayed up until midnight to hear the record, but fans were left scrambling after streaming giant Spotify crashed!

Literally just as the album was released as users reported a disconnection to the servers despite there being internet connected to the internet!

According to Downdetector.com, Spotify saw a massive outage across the world at midnight ET — the exact time Swift’s album was released. Fitting it “died” when “Midnights” dropped… at Midnight.

Taylor Swift did not plan this, an important distinction to make!

Fans expressed their frustration at the glitch, with many being left disappointed they weren’t able to immediately hear the singer’s 13 new tracks.

Some Swifties were left even more scorned, finding out their vinyl pre-orders of the album, were missing 7 tracks that were EXCLUSIVELY on streaming services!

That’s a sweet nothing for them. Is Taylor an Anti-Hero?