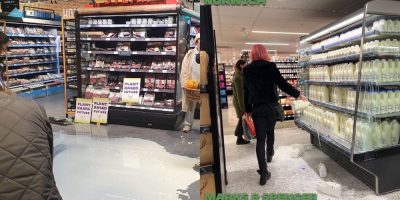 The latest environmentalist trend is here: pouring out milk in grocery stores.

This is currently a problem across the UK!

Teenagers concerned about the environment are doing “milk pours.”

The new trend involves going into grocery stores, picking up cartons of cow-produced milk, and pouring out their contents, according to the animal rights group Animal Rebellion.

Videos that have popped up on social media show teens pouring milk onto the floor, over sales counters, and elsewhere in the store.

The animal rights group Animal Rebellion tweeted out over the weekend, “The dairy industry is incredibly environmentally destructive. The world’s top 5 meat and dairy corporations are now responsible for more GHG emissions than Exxon, Shell or BP.”

The group wants a plant-based future!  They and other environmentally friendly organizations are calling for the planet to “dramatically reduce its greenhouse gas emissions” by eliminating meat and dairy consumption.

Several countries around the world have imposed regulations on the agriculture industry, such as limits on nitrogen emissions caused by dairy production. Environmentalists have encouraged the use of dairy alternatives, such as almond, soy, coconut and oat milk, though these too have been criticized.