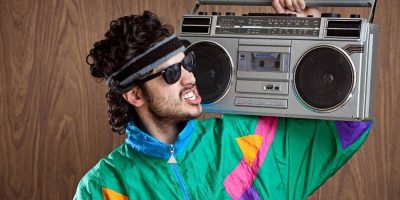 Break out your Oakleys, and go get those tips frosted.  Because ’90s EVERYTHING is trendy again.

Google Trends just put out a bunch of stats showing that the ’90s have officially overtaken the ’80s as the decade we’re most nostalgic about right now.

They looked at how many people have been googling different decades over the past year, from the 1960s through the 2000s.  And the ’90s are #1.

Searches for the phrase “90s outfit” hit an all-time high this month.  So did searches four these four ’90s items:  Crop tops, sweater vests, platform shoes, and anything “preppy.”

’90s jeans are getting trendy again too.  Searches for “wide leg jeans,” “Mom jeans,” and “low rise jeans” are all up.

Searches for “90s hip hop songs” are also up 400% in the past month.  And a ton of people are searching for “90s Halloween
costumes” this year.

Reminiscing on all those days of burning CDs or getting excited when the teacher rolled out the TV cart during class? That’s what people of this top searched decade – the 1990s – will fondly remember.

What other 90s trends get you feeling #nostalgic? pic.twitter.com/YPbUzn5fg2