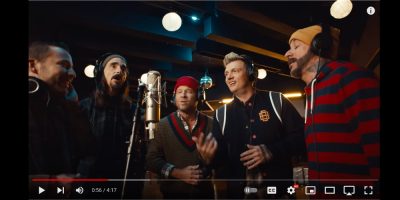 This Christmas is already shaping up to be better than “Last Christmas,” as the Backstreet Boys bring new life to the Wham! classic, set to be part of their new holiday album A Very Backstreet Christmas.

“It’s officially the holiday season!! 🎄 To kick things off, the official music video for ‘Last Christmas’ is OUT NOW! We hope you all enjoy it! 🎁,” the group wrote as the IG caption, accompanied by a clip of the music video.

A Very Backstreet Christmas marks the group’s first-ever Christmas album, and features new takes on many holiday classics, including “White Christmas”, “O Holy Night” and “I’ll Be Home for Christmas.”

The guys say that they’ve wanted to do a Christmas album for nearly 30 years, so enjoy!

And to make things extra special, BSB will also be starring in their very own TV special, A Very Backstreet Holiday, airing December 14 at 8 PM ET on ABC.