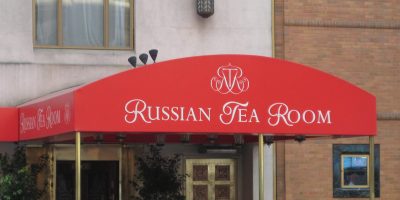 The Russian Tea Room is a 100-year-old New York City icon that draws in locals and tourists from around the World.

The establishment usually brings in crowds who attend concerts at nearby Carnegie Hall, or those coming from or heading to a Broadway show!

The restaurant was even the setting of some famous movies including “Tooties” and “Manhattan.”

But last week, the place was almost vacant with only two of its 30 tables taken.

According to the restaurant’s website, the Russian Tea room isn’t Russian at all. It’s owned by a financial group incorporated in New York State. It was opened in 1927 by, perhaps apocryphally, “White Russian expatriates who had fled the Bolsheviks,” but since the late 1920’s it’s been under US ownership.

But that hasn’t stopped protesters looking to boycott all things Russian, even if it’s only a name and cuisine.