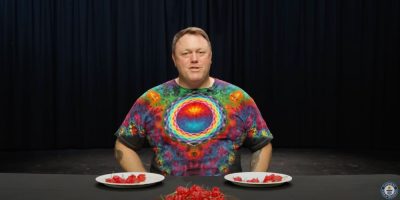 Humans are weird, and the Guinness World Records proves that every time they announce a new accomplishment-if you can call it that!

Jamie Keeton, aka “Canhead,” or “Canpa” to his grandchildren, used air suction to affix 10 empty beverage cans to his face and shaved head, earning the record when the cans remained in place for at least 5 seconds.

Most eggs balanced on the back of the hand

Ibrahim Sadeq of Nasiriyha, Iraq, managed to balance 18 eggs on the back of his hand, equaling the record originally set by Jack Harris of Britain in May 2020, making the two men co-holders of the record.

Jacob Chandler of Oregon found all 26 English-language letters in a can of alphabet soup and placed them in order in 2 minutes and 8.6 seconds after researching unusual Guinness World Records to impress his son, Brycen.

Vermont teenager Ariana Wunderle, who has been performing with a youth circus since the age of 2, donned 4-inch high heels and walked 639 feet 7 inches across a tightrope at Bellows Falls Union High School in May, while she was a senior at the school.

Largest gathering of people with the same first and last name

Japan’s Same Name Association of Hirokazu Tanakas, founded in 1994 by Hirokazu Tanaka, 53, managed to gather 178 people who share the name at an October gathering in Tokyo’s Shibuya Ward.

Farthest distance to blow a pea

Serial record-breaker David Rush earned his 250th Guinness World Records title when he used the breath in his lungs to blow a pea a distance of 84 feet and 11.28 inches across a level floor.

Duane Hansen climbed into a hollowed-out pumpkin on the Missouri River the day after his 60th birthday and paddled the unusual vessel for a distance of 37.50 miles from Bellevue, Neb., to Nebraska City.

Lim Kai Yi of Butterworth, Malaysia, put his award-winning puzzle-solving skills to an unusual test when he took a fully-disassembled Mr. Potato Head toy and put all of the pieces in the proper spots in 5.43 seconds.

Competitors in the 2022 National Beard and Moustache Championships in Casper, Wyo., teamed up to have their beards clipped together into a chain that measured a record-breaking 150-foot chain of facial hair.