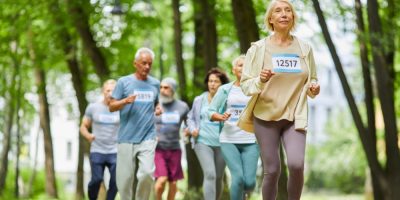 Those over 50 are becoming more daring with their hobbies and interests – with marathons, hand-gliding and getting a TATTOO among the top 50 things they want to experience.

According to a new poll of people over 50, almost half of them have a new outlook on life with 62% being keen to embrace new things.

Writing a book, taking up skiing and conquering a mountain are among the things on their list after 53 percent firmly believe ‘age is just a number’.

Becoming fluent in a new language, running a marathon and finally learning an instrument they’ve always wanted to play also made the list.

People over 50 tend to have more time for themselves and are ready to take on more challenges.

More than half think it’s important to have aspirations with three in 10 more likely to fulfil these now they are at a later stage in life.

Reasons for this include having more spare time, retirement and no longer having children who live at home.

Since getting older, nearly half have gained a new perspective on things – making them more driven to achieve their ambitions and try new experiences.

The OnePoll study also found a third are considered by others as someone who embraces life and is not afraid to do something new.

Encouragingly, 71 percent still consider themselves ‘young’ – with 82 percent of those who agreed with this statement aged 75 or older.

And it emerged 66 percent of all those over 50 believe you are only as old as you feel.

TOP ACTIVITIES THAT THOSE OVER 50 WANT TO TRY!