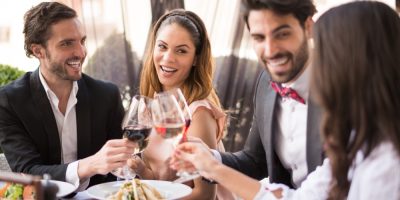 A study of 2,000 adults who consume alcohol revealed 28 percent have made excuses to avoid drinking.

And 43 percent admitted to cancelling social plans to avoid the pressure of drinking alcohol altogether.

Of those most likely to persuade others to have an unplanned boozy night, say that friends are worst, followed by their partner.

While others have faced pressure at weddings and work events.

But for the 28 percent who have made up excuses to avoid an alcoholic drink, 38 percent put it down to having an early start the next day, while 32 percent claim to be on medication.

And three in 10 tell others they’re the designated driver, even if they’re not, with a fifth lying about wanting to take a break from booze.

However, the real reasons people have chosen not to drink alcohol included wanting to wake up feeling refreshed the next day, getting a better night’s sleep, and trying to live a healthier lifestyle.

The research found that people tend to rely on excuses that are functional, such as having work the next day or driving, placing responsibility outside of their control.

The study also found a quarter of those who have felt pressure to ditch plans to stay on the soft drinks find birthday parties are where they have encountered the most pressure from others.

While 24 percent had an issue at a Christmas shindig.

It also emerged 59 percent of those polled via OnePoll, already do or would consider drinking a no or low-alcohol beverage.

And beer, wine and mocktails are among the most common drinks respondents have tried.