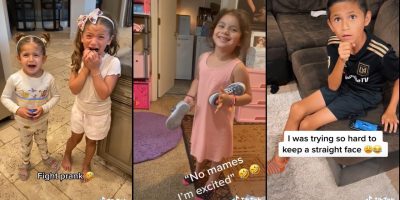 Any good parent teaches their kid they shouldn’t fight someone unless there’s no other choice.  But this is 2022 and we have TikTok now, so check out this new trend.

The newest TikTok challenge is to prank your kid by telling them you’re about to fight someone, just to see if they’ve got your back.  Parents are posting videos with the hashtag “FightPrank,” and they all start the same way.

The parent walks in and tells their kid to drop what they’re doing and put their shoes on because they need help.  Then they say that they have to go fight another parent, who has a kid about their age.

They need the kid there just in case the other person’s kid jumps in.  So the scenario we’re describing is a two-on-two, parent-child smackdown.

Just to be clear, no one fights anyone in the videos.  But it’s amazing how many kids DO have their parent’s back, especially young kids.  We’ve seen a few who rejected it and said no.  But most of them are on board immediately.