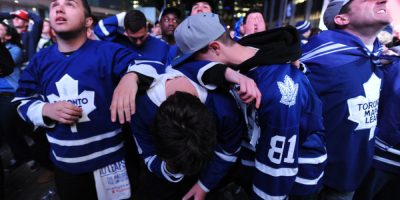 In a new poll created by hockey analyst Jfresh, Leaf fans have been crowned the worst in the league in a few categories.

And it wasn’t even remotely close, as the Leafs’ fanbase easily outpaced 31 other teams to rank as the most annoying, delusional and unhinged in the entire NHL.

It was Montreal Canadiens fans who found Leafs supporters to be the worst, with 81 percent of Habs fans voting the Leaf fans as the most insufferable.

Not too far behind Montreal, 79 percent of Winnipeg Jets fans and 76 percent of Edmonton Oilers fans voted Toronto as the most annoying fanbase.

Leaf fans also voted the most delusional believing the team is just one season away from the Cup every year… Leaf fans were also voted most likely to meltdown and to be most unhinged!

They are super loyal!
They are passionate:
They like junk food
They won’t play defence
and they’re OK with assists!
They won’t get the too many men penalty