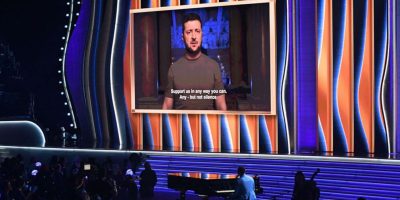 Many of Hollywood’s elite have made no secret their support of Ukraine in the country’s ongoing war with Russia.

A number of celebrities have even skipped a red carpet or two to visit the country, adding their voices to the fight against Russian aggression.

This week via Twitter, Ukraine’s Ministry of Defense made a special mention to some Western stars who have gone to the country or publicly voiced their support for the embattled nation.

“[Ukriane] is grateful to Hollywood stars who, despite the danger, have visited us,” wrote the Minister in the caption. “@SeanPenn, @LievSchreiber, Angelina Jolie, @BenStiller you are more than just an inspiration to all of us. Millions around the world have heard the truth from you about the struggle of the [Ukrainian] people.”

Perhaps most visibly, early on in the war, Sean Penn visited Ukraine to make a documentary about the situation in the country, famously walking to the Polish border to escape the quickly escalating war.

In that video, Zelensky (a former actor) made a deft reference to Penn’s and his previous profession: “All of this is not the scenery of a blockbuster about the apocalypse,” said the President. “All of this is our reality.”

The grateful Ukranian tweet came right as Ben Stiller, who is an ambassador for the United Nations High Commissioner for Refugees, had visited Ukraine to mark World Refugee Day.

In addition to making a supportive stop in Poland – which has taken more than one million refugees from Ukraine – Stiller met with Zelensky. “It’s a great honour for me,” Stiller told Zelensky. “You are my hero. You quit a great acting career for this.”

Jolie, who is a special envoy with the United Nations High Commissioner for Refugees, visited Ukraine in April to meet with refugees and volunteers.