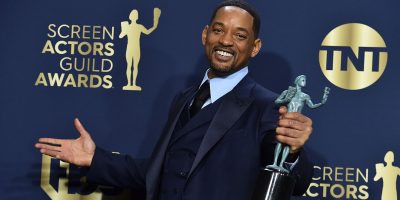 Will Smith will make millions of dollars for his role in the Apple TV+ movie Emancipation.

According to Variety, Will Smith will be paid $35 million for the film. The escaped-slave thriller is expected to be released in 2023.
Emancipation was originally targeted for a 2022 release. The Antoine Fuqua-directed movie was delayed to 2023 in wake of Will Smith slapping Chris Rock at the Oscars.

Will Smith spoke about Emancipation in a 2021 interview with GQ. Will explained why he accepted the role after years of avoiding making films about slavery.

“This was one that was about love and the power of Black love,” he said. “And that was something that I could rock with. We were going to make a story about how Black love makes us invincible.”

More recently, Antoine Fuqua hyped up the Will Smith-led film in an interview with The Playlist. Antoine called Emancipation the best work of his career.

“Don’t have a release date for it yet, but, as a feature film goes, it’s the best thing I’ve ever done,” he said. “As a director, I mean, you hope to grow … I see some growth in my soul … it is epic.”