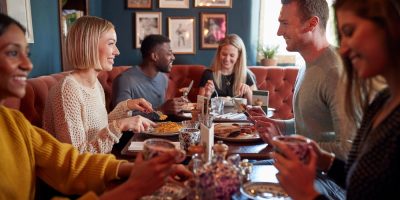 According to servers, there are some golden rules as a customer that we should follow. In case it’s been a while since you’ve eaten food in public, here are the rules.

Rearrange the tables to suit your needs.
Customers are not at a restaurant to treat the layout as their own personal Tetris game. Don’t mess with the tables.

Sending Food back!
Send food back because it wasn’t what you expected-common! It’s fine to send back food if it’s improperly cooked or the wrong dish entirely, but don’t send it back just because you don’t like it. (Example- I didn’t know that there was cheese on it)

Stiff a Server!
Poor service equals a lousy tip or no tip at all. Or maybe you’re just plain cheap. Whatever the reason, don’t do it.  You’re not just tipping that server, you’re tipping the busser, food runner and kitchen staff…

Don’t Leave Unsanitary Items On The Table
If you blow your nose, take the tissue with you. If you change your baby, throw the diaper into the garbage.