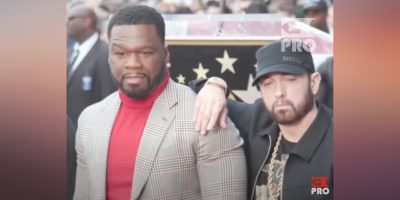 50 Cent and Eminem revealed on Friday that they are currently in the process of ‘developing an ‘8-mile’ television show.’  50 Cent confirmed, “We’re in motion.  It’s gonna be big … You know I ain’t got no duds.”

The series will not be ‘an exact copy of the film,’ which originally came out in 2002.  50 Cent compared the upcoming series to the reimagined ‘Fresh Prince of Bel-Air’ reboot.  According to the film’s synopsis, “A young rapper, struggling with every aspect of his life, wants to make it big but his friends and foes make this odyssey of rap harder than it may seem.”

50 Cent, whose real name is Curtis Jackson, said it took ‘very little convincing for Eminem to get behind this project,’ “I think it should be there for his legacy, because if you don’t see … it’s important to me that they understand it.”

And in other exciting news, Eminem ended the year on a high note.  He was the most-watched rapper on YouTube in 2022.