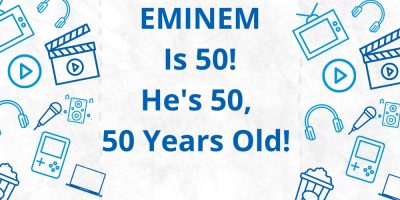 Get ready to Lose Yourself as Eminem celebrated 50 years on earth on October 17th!

HIGHLIGHTS FROM HIS CAREER!

In 2000, Eminem released “The Marshall Mathers LP.” The album sold more than a million copies in its first week, spawned several hit songs like “The Real Slim Shady” and snagged the Grammy Award for best rap album.

Eminem starred in “8 Mile” in 2002. The film tells the story of a young white rapper from Detroit trying to make it in the music business. The film garnered critical acclaim, and Eminem earned an Oscar for best original song for “Lose Yourself,” which he wrote for the soundtrack.

After Eminem became a rap star, he reunited with his original rap group D12. The group released two hit records but has been less active in recent years after the death of member Proof in 2006.

Over the course of his career, Eminem has collected 15 Grammys and 44 total nominations.

Eminem took a break from recording solo material from 2004 to 2009. The rapper had been dealing with substance abuse issues and spent some time in rehab during this period.

In 2009, Eminem released his comeback album “Relapse” and quickly followed it up with “Recovery” in 2010. Both were critical and commercial successes; they also both won the best rap album Grammys.

In 2013, he released “The Marshall Mathers LP 2,” almost exactly 17 years after the original.

In 2021, he opened a Detroit restaurant aptly named “Mom’s Spaghetti.”

In May 2022, Eminem joined Dolly Parton, Duran Duran, Eminem, Lionel Richie, Carly Simon and more to be inducted into the Rock and Roll Hall of Fame.

OTHER THINGS THAT TURN 50 THIS YEAR!

Other things that are 50 this year include, The Godfather Movie, the Compact Disc invented, and Atari bringing out the first-ever commercial video game, Pong.

The Egg McMuffin was introduced in 1972, how about stovetop stuffing, and Snapple? Doritos Nacho cheese all hit store shelves 50 years ago! And thanks to the invention of Bounce driver sheets, we will never have static cling again!