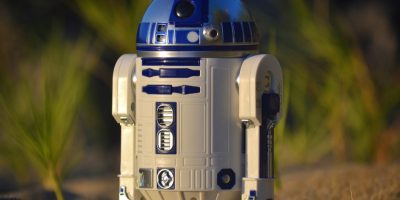 A 44-year-old in Florida named David Proudfoot is facing charges after he tried to land a security job at Disney World by stealing R2-D2.

He recently applied for a job as a security guard at the park.  And he thought he could up his chances by exposing weaknesses in their security protocols.

So he dressed up as an employee, walked into one of their resort hotels on May 31st and tried to steal a replica R2-D2 droid worth $10,000.  But his plan didn’t work.  And if anything, he showed that their security is fairly robust.

Someone saw him pushing a cart around, and it seemed suspicious.  So security confronted him, and he claimed to work there.  But they knew he was lying when he said his job was to move stuff around the park, but he didn’t know where anything was.

He tried to lead them to an employee locker room but went the wrong way.  Then he couldn’t open the locker that was supposed to be his.  And when they asked for his boss’s name, he gave the name of an employee who works in California, not Florida.

He eventually admitted he was trying to “show weaknesses” in their security so they’d hire him.  Instead, he’s facing charges of grand theft.