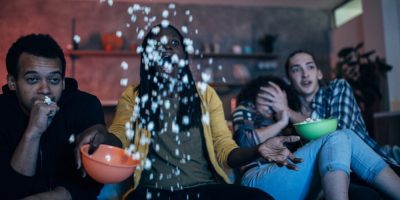 The top three scariest movies of all time, according to experts at Study Finds, are: “The Exorcist”, “Halloween” (1978), and “Paranormal Activity”.

A recent study indicates that fear has a “sweet spot” that can cause pleasure for humans. Researchers from Aarhus University say it’s been long suspected that physiological arousal plays a role in why people find horror movies and haunted houses so appealing. This arousal would include a quickening pulse and a release of hormones in the frightened person’s brain.

With that being said, a new study has determined that these are the scariest movies ever!

The Exorcist is well-respected as one of the greatest horror films of all time, based on the story of a Catholic-sanctioned exorcism of a 12-year-old girl that makes for a literal head-spinning horror movie.  “If The Exorcist can still make its original 1973 viewers shudder at the thought of it decades later, something is possessing about this film,” Esquire writes.

Halloween is among the top chilling slasher masterpieces that have kept viewers up at night for ages. It may just be a crazy person in a white mask, but that was enough to captivate audiences for years.

Paranormal Activity is a horror film fan-favourite, especially for those who are keen on ghost films. The story unfolds as a couple moves into a suburban home and learns they are being terrorized by a supernatural presence.

“Stanley Kubrick’s masterpiece of execution and claustrophobia still retains the power to frighten audiences out of their wits,” Time Out writes in its review.

It Follows is a more recent addition to the list of movie critics’ most-loved horror films. The metaphorical story takes you through varying perspectives of being tortured by a shape-shifting monster. Sounds fun, right?