Sony Music executives have terminated the record label’s professional relationship with producer Dr. Luke. He and Kesha have been in a legal battle since October 2014 when she filed suit, alleging he mentally, emotionally and sexually abused her throughout their 10-year musical partnership. Meanwhile, Dr. Luke’s court battle with Kesha is ongoing – the Tik Tok pop star is still trying to convince a judge to release her from her recording contract…

Katy Perry Wants You To Bake Her A Cherry Pie… 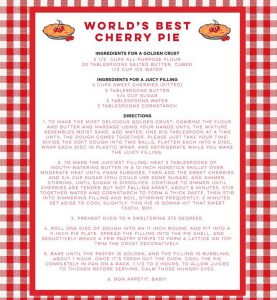 It looks as though Katy Perry is holding a bake off, but in the most vague way possible.  Here is a tweet from the one and only Katy Perry that involves baked goods and the vague promise of a “surprise.”  “Bake me a pie and you may get a surprise,” reads the tweet, along with a recipe for a fairly standard cherry pie. No one knows what the surprise is, but that doesn’t matter because many, many people have baked a cherry pie for Katy Perry. Important to note: the last step of the directions reads “Bon Appétit, baby!” “Bon Appétit” is the name of her latest single.

A Mini Super Nintendo is coming this Christmas!

According to eurogamer.net, the same website that had the jump on Nintendo’s Switch, the company is set to release a mini version of the Super Nintendo with built in games.  Nintendo will follow up its smash hit NES micro console with a mini version of the SNES, sources close to the company have confirmed to Eurogamer.  The SNES mini is currently scheduled to launch in time for Christmas this year. Development of the device is already under way, our sources have indicated.

A movie about Madonna’s early years is heading to the big screen.

Blond Ambition has been picked up by Universal, according to The Hollywood Reporter.  The script, written by Elyse Hollander, follows Madonna Louise Ciccone in New York City in the early ‘80s as she pursues a pop music career and works on her debut album.  It’s not clear if Madonna has given her blessing to the project, nor if producers have secured rights to Madonna’s early hits, including “Borderline,” “Lucky Star” and “Holiday.”  There’s also no word on casting for an actress to play young Madonna.